My husband knows that when we go to a restaurant and if after studying the menu, putting it down, picking it up, putting it back down again, looking on the back, asking about the specials, asking a bunch of questions, and then asking the waiter to bring me a bunch of olives and orange slices from the bar….if after all that I order THE CHICKEN it’s because there is NOTHING else on the menu I want or can eat.  I cook chicken at home. All the time. If I wanted to eat chicken I’d stay home, I don’t want to eat it when a professional is making it for me. I like making those chefs earn their $1.50/hour wage…make me something I can’t make myself at home for heaven’s sake!!!!!

OK on to the chicken recipe now that I have a) revealed what a giant pain in the ass I can be b) that I am, in fact, married to a saint and c) you can correctly assume that we are big tippers.

This recipe requires minimal advanced planning other than needing to have some not-so-common ingredients at hand. Yes, you’ll have to go buy some items that you may think you’ll never use again (like star anise pods) but believe me you will make this recipe once and will want to make it again and again and you’ll have the ingredients already at hand and you will pat yourself on the back for being so organized. A little self-congratulations never hurt anyone.

The most important ingredient in this recipe is of course CHICKEN. Since it is the primary ingredient please allow me to state the obvious: don’t buy that crappy, pale, over hormoned, synthetic, latex excuse for chicken they sell at the supermarket. If you can afford it, spend more and buy organic, no hormone, free range chicken. I try to avoid the pre-packaged chicken from Whole Foods and I buy it from the nice butcher behind the counter at the Whole Foods. This chicken is so moist and the textural difference is truly notable. I’ve also recently discovered that Costco’s organic chicken is amazing and affordable. I know, I’m late to the party on that one.

Here’s the recipe which I originally found on the Food Network website but have tweaked for us mere mortals:

serves 4 (or more, but then double all the ingredients for the marinade because you can never have too much marinade)

How to:
Whisk the soy sauce or tamari, rice wine or substitute, hoisin sauce, and honey in a bowl and set aside. Heat the oil in a skillet over high heat and add the star anise and peppercorns. Cook stirring and swirling for about ten seconds just to toast the spices and release their aroma. This will burn fast so literally count to ten. Reduce the flame and add the cilantro, scallions and garlic and cook for 30 seconds to a minute. Add the soy sauce mixture and simmer over medium heat until slightly thickened and reduced. 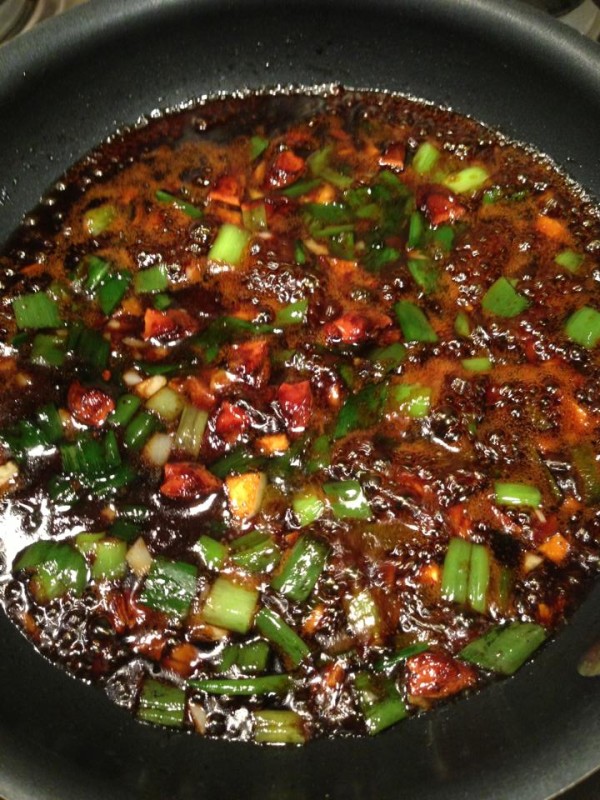 Transfer to a large bowl and let it cool, then add the chicken and toss to make sure the chicken is properly coated. If you’re going to roast right away then there’s no need to refrigerate but if you want the chicken to marinate for 30 minutes (and up to four hours if you have the time) then cover and refrigerate. Transfer the chicken to a roasting dish WITH THE MARINADE, and pour 1/2 cup of water in the roasting dish. The additional water will dilute the marinade, add moisture to the cooking process and results in more sauce.

Preheat the oven to 400 degrees F. If you have a convection roast setting then go for it if not the bake setting is perfectly fine but then position the rack in the upper third of your oven. Roast the chicken skin side up for 20 minutes, baste with pan juices, and reduce the oven temp to 350F. Continue to roast until the skin is glazed (it will look like candy), and a thermometer inserted into the breast reads 160F (about 15 more minutes, but check frequently so you don’t overcook it).

Transfer the chicken to a serving bowl and pour the  reduced, very flipping hot, and delicious marinade over chicken. Serve with couscous, quinoa, rice or anything that will soak up some of those juices on your plate. Everyone ends up using their fingers to get the last bit of meat off the bones. It’s OK. It’s flattering to the cook. 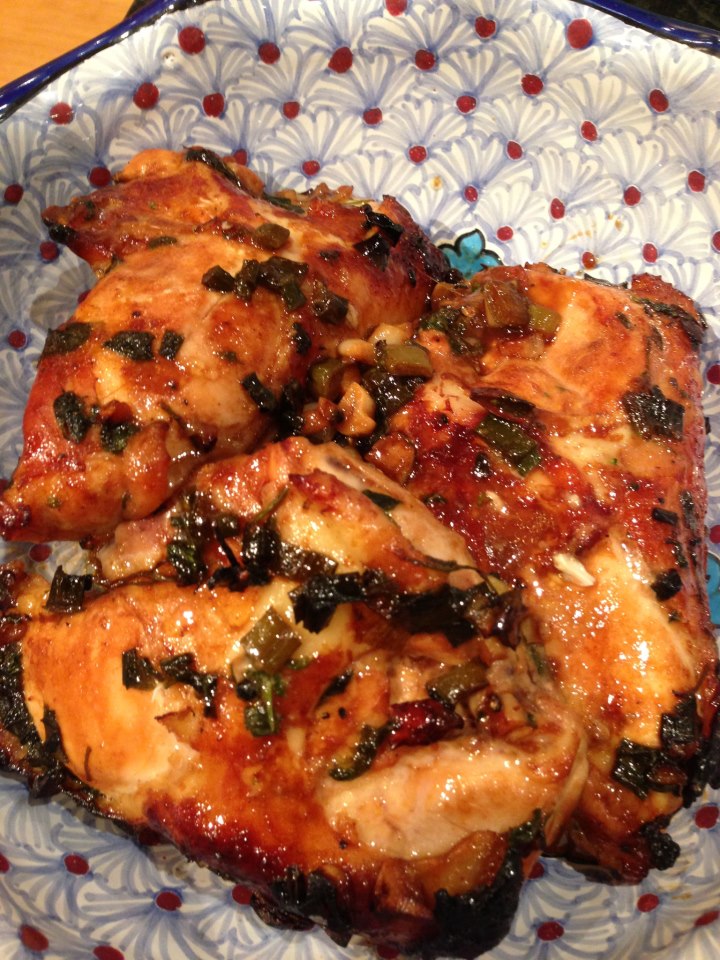